On the civil rights front, in recent years there has been a shift in action from substantive improvements to symbolic cleansing.  While the two should not, in principle, be in conflict, as a practical matter people tend to cling to their favorite symbols long after a substantive battle has been lost.  And they can fight harder over them than they do with substantive change.

In fact Charlotteville’s Robert E. Lee statue was authorized some fifty years after the end of the Civil War, at a time when southerners were redefining the struggle.  As ABC reported:

After the Civil War, Lee resisted efforts to build Confederate monuments in his honor and instead wanted the nation to move on from the Civil War.

After his death, Southerners adopted “The Lost Cause” revisionist narrative about the Civil War and placed Lee as its central figure. The Lost Cause argued the South knew it was fighting a losing war and decided to fight it anyway on principle. It also tried to argue that the war was not about slavery but high constitutional ideals.

As The Lost Cause narrative grew in popularity, proponents pushed to memorialize Lee, ignoring his deficiencies as a general and his role as a slave owner. Lee monuments went up in the 1920s just as the Ku Klux Klan was experiencing a resurgence and new Jim Crow segregation laws were adopted.

In fact, therefore, the statue was not to celebrate a Civil War general but a rewriting of the war he fought.

Back in 2008, I addressed a similar problem as it had come up during the election campaign:

The other day Howard Dean made his comment about wanting to get the votes of people who drove pickups with Confederate flag stickers. He was immediately excoriated but what he was doing was simply reaching out to a constituency that Democratic liberals have too long dissed, the less successful white male.

In fact, the best way to change people’s minds about matters such as ethnic relations is to put them in situations that challenge their presumptions. Like joining a multicultural political coalition that works. It’s change produced by shared experience rather than by moral revelation.

Martin Luther King understood this as he admonished his aides to include in their dreams the hope that their present opponents would become their future friends. And he realized that rules of correct behavior were insufficient:

“Something must happen so as to touch the hearts and souls of men that they will come together, not because the law says it, but because it is natural and right.”

This doesn’t happen logically, it doesn’t come all at once, and it doesn’t come with pretty words. Tom Lowe of the Jackson Progressive voted a couple of years ago in favor of a new Mississippi flag without the confederate symbolism. But in retrospect, he wrote later, he realized that the voters’ rejection of the change was a honest reflection of their state of mind:

“Perhaps a time will come when we have truly put aside our nasty streak of racism. When that time arrives, maybe we will choose to replace the flag with something more representative of our ideals. On the other hand, when we reach that point, we may no longer care about the symbolism of the Confederate battle flag. Or perhaps we will keep it for another reason: to make those of us that are white humble by reminding us of our less than honorable past.”

Or perhaps do what the Southern Student Organizing Committee did at the beginning of the civil rights movement: seize the old symbol for a new purpose. The SSOC logo showed a black and white hand firmly clasped across a confederate flag. It is, within my extensive button collection, a favorite because it illustrates how symbols can be transformed and used for better purposes. Yes, the confederate flag is still there, but firmly in the background, reminding one of how hard won were the clasped hands in front. 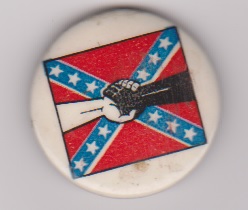 The decline of liberalism has been accelerated by the growing number of American subcultures deemed unworthy by its advocates: gun owners, church goers, pickup drivers with confederate flag stickers. Yet the gun owner could be an important ally for civil liberties, the churchgoer a voice for political integrity, the pickup driver a supporter of national healthcare.

We’ll never know until we try. Dean, coming off some successful approaches to black voters, has now turned to another group the establishment, including its liberal branch, doesn’t really give much of damn about: the struggling white male. A Dean bumper sticker next to a confederate flag on a pickup may not be utopia, but it would be sure sign of positive change which, these days, would be a pretty big change in itself.

It is also interesting to note, as William Saletan does in Slate, that Dean received quite a different reception before he was the frontrunner. Here’s what he told the Democratic National Committee last February:

“I intend to talk about race during this election in the South. The Republicans have been talking about it since 1968 in order to divide us, and I’m going to bring us together. Because you know what? White folks in the South who drive pickup trucks with Confederate flag decals on the back ought to be voting with us because their kids don’t have health insurance either, and their kids need better schools too.”

Writes Saletan: “I have that speech on videotape. I’m looking at it right now. As Dean delivers the line about Confederate flags, the whole front section of the audience stands and applauds. It’s a pretty white crowd, but in slow-motion playback, I can make out three black people in the crowd and two more on the dais, including DNC Vice Chair Lottie Shackelford. Every one of them is standing and applauding. As Dean finishes his speech, a dozen more black spectators rise to join in an ovation. They show no doubt or unease about what Dean meant.”

The Dean controversy is driven by several factors. One is the growing liberal preference for proper language and symbolism over proper policy. Thus confederate flags soar above such other possible issues as the drug war with its disastrous effect on young black males, discrimination in housing and public transportation, and the lack of blacks in the U.S. Senate. Further, while liberals are happy to stigmatize certain stereotypes, they are enthralled with others, such as the self-serving suggestion that they represent a new class of “cultural creatives” saving the American city. And from whom, implicitly, are they saving the American city? From the blacks, latinos and poor forced out to make way for their creativity.

Another factor has far deeper roots: our fear of public discussion of class issues. Although this has repeatedly been noted by both black and white observers, it has little effect on our politics or the media, both of which project the myth that ethnic conflict occurs independent of economic divisions.

One who understood otherwise was the black writer, Jean Toomer – who once described America as “so voluble in acclamation of the democratic ideal, so reticent in applying what it professes.” Writing in 1919, Toomer said, “It is generally established that the causes of race prejudice may primarily be found in the economic structure that compels one worker to compete against another and that furthermore renders it advantageous for the exploiting classes to inculcate, foster, and aggravate that competition.”

In dealing with the current complexities of ethnic symbolism it Is useful to ask: what will become of our efforts? If the removal of a Robert E. Lee statue has energized white nationalists in a way that has been rarely seen in recent years, don’t we have to ask whether such an approach is pragmatically wise?

There is no easy answer, but we should at least consider the issue. For example, what if the city of Charlottsville let the bushes grow up around the statue and did nothing to preserve it? What if there was next to the statue an exhibit outlining the history of the town’s actual role in the war, in slavery, and in the subsequent segregationist south?  For many the statue would become a symbol of these evils rather than an honor. History doesn’t disappear but it can be redefined.

It will cost $700,000 to remove the statue. Think of the true history exhibit you could have for half that price.

There are some 1000 Confederate statues still up in the south.  We don’t need 1,000 more reasons for white nationalists to exert their evil. Converting these statues into a true history of where they are located could educate everyone who came to them.