From our overstocked archives 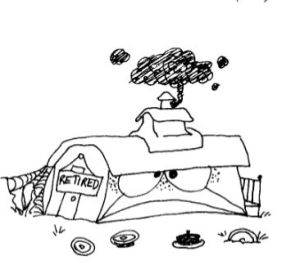 I am bothered by the Southern 1 Railway’s callous attitude towards cabooses. The line was recently struck by trainmen in a dispute over whether they should ride in the caboose or in the locomotive. Lawson G. Tolleson, assistant vice president in charge of labor relations for Southern, was quoted in the press as claiming that the strike was illegal, and that the trainmen on his line no longer had any use for cabooses and that they should ride in the engine cabs where “their work is.” I wonder whether this is the open- ing blow in a vast conspiracy against cabooses. It has that smell to it and if it be true, the train riding and train watching public had better prepare itself for a hard struggle. A freight train without a caboose is like a dinner without dessert, a symphony without a coda, or a year without December.

There are certain things that require a clearly defined end. They can not just trail off like a wisp of diesel smoke. A freight train is one of these things. Mr. Tolleson seems to suffer from aesthetic deficiency, a chronic form of malnutrition among assistant vice presidents. Perhaps (he has no use for cabooses, but his company’s trainmen, fortunately, do and are willing to go out on strike to prove it. If the Southern trainmen had wished to ride in the locomotive they would have become engineers. They made a definite choice as to which end of the train they wanted to ride and the Southern should not try to push them up front. I sympathize with the trainmen for I believe that I too would prefer to sit comfortably in a caboose, drinking black coffee and watching the parallel lines of the Southern’s rails meet in infinity behind me, rather than be perched in the business-like, machine- studded cab of a locomotive.

There may be some merit to Mr. Tolleson’s argument from a business point of view. But he should realize that the Southern risks not only alienating trainmen by its insistence on efficiency; it must also be prepared to take on thousands of young boys and their regressed fathers who have come to count upon the caboose as the final delight in watching a 130-car freight train go by. They would not be pleased by a finis written with a flat- car, piggy-back, box car, or even a bright red hopper. Only a caboose will do. As the Amish so nicely put it: “When the little red one comes, the train’s all ain’t?’’ And I, like the Southern trainmen, thousands of young boys, and their regressed fathers, would like it no other way.